Let’s look at all the different versions of the Reebok Nano X CrossFit Shoe from Reebok.

This shoe has been out for a couple of months, and there are some different versions.

Here’s an example, this is the Reebok Nano X Unknown.

It’s a light-weight, mid-cut version of the Nano X.

What’s the key differences between each version?

That’s what we’re going to look at in-depth.

Here’s all the different versions of the Reebok Nano X that we are going to compare and contrast in this article: 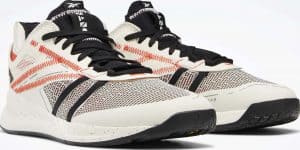 Nano X iO Training Shoes (Chalk/Carotene/Black) Show some style , and maybe get some double takes with this "inside out" shoe from Reebok.
Click to See Price (Reebok)

Reebok Wonder Woman Nano (Horizon Blue / Primal Red / Gold Met.) Reebok teamed up with Warner Brothers studios to deliver a Nano X that's inspired by the Wonder Woman costume and comics. Built for all the ways you move, these training shoes pack enough cushioning for high-impact exercises and provide a stable base of support for lifting moves. Wonder Woman graphics will make you feel like a superhero.
Click to See Price (Reebok) 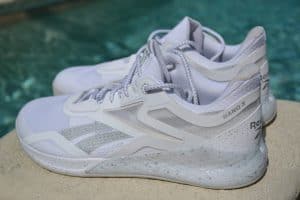 Nano X PR (White / Pure Grey 2 / Silver Met.) The newest version of the Reebok Nano X is made with lightweight materials that help you get an extra rep or PR (But it actually weighs the same as the regular Nano!) Rogue Fitness is also selling the Nano X PR - but for $10 cheaper than Reebok! Get it while it lasts...
Click to See Price (Rogue Fitness) 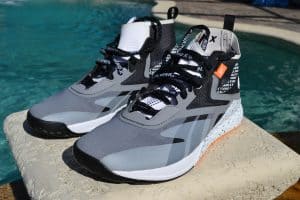 Reebok Nano X Unknown (Pure Grey 5 / Black / White) With these men's mid-cut shoes you'll be ready. The textile upper and high collar provide extra coverage and support. Added midsole cushioning and a decoupled outsole make them more comfortable than ever before. This is the colorway shown in most of these photos.
Click to See Price (Reebok) 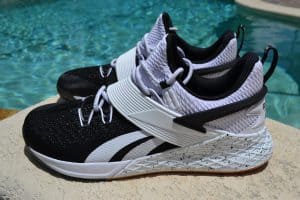 Nano X Froning (Men's - Black / White / Reebok Lee 7) Known as The Fittest Man in History, Rich Froning Jr., joins the Nano franchise with these men's shoes. They were designed to fulfill all the needs of an elite athlete. Coming July 21st - these WILL SELL OUT!
Click to See Price (Reebok) 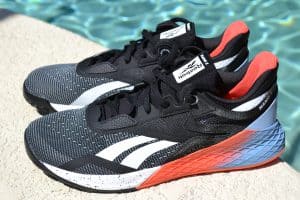 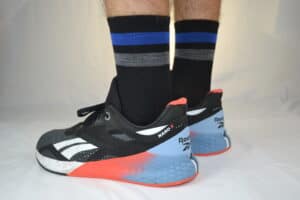 Vertex Micro Crew Ultra-Light Cushion (Darn Tough) You know what kind of sock works best with a lightly cushioned cross trainer like the Nano X? Get a running or athletic sock with some padding in the heel and forefoot - like these from Darn Tough. Merino wool/Nylon/Lycra Spandex - made in the USA
Click to See Price (Darn Tough)

Let’s compare and contrast – and find out all about the different versions of the Reebok Nano X.

Here’s the basic version of the Reebok Nano X.

This is the 10th version of Reebok’s CrossFit training shoe.

It no longer has the CrossFit label on the shoe, as the marketing agreement has expired.

But, it’s the same basic shoe you know and love.

They’ve iterated on this design now for many years – so it’s pretty darn good.

One of our favorite features is the ultra-wide toe box – there’s nothing else like it on the market.

Now, let’s look at the other versions that have since become available.

Rich Froning has his own official edition of the Reebok Nano X.

There are two colorways available.

The upper is different than the regular shoe, it uses a fancier material – and premium laces.

There’s also an elastic strap to help secure the laces – Rich is famous for using his Nanos untied!

But, these are the heaviest of all the Nanos – clocking in at almost 1 full ounce heavier than the regular Nano.

They look good – but they don’t really operate any differently than the regular Nano.

The Reebok Nano X PR is one of the more recent revisions of the Nano X.

THis is a nice looking shoe.

The PR stands for “Personal Record” and due to the different materials in the upper, Reebok claims this to be lightweight.

In reality, it weighs exactly the same as the regular Nano X, as we found in our hands on test.

It still looks good though.

Unlike the PR edition, this version of the Nano X is light-weight.

This is the Reebok Nano X Unknown – it’s a mid-cut version of the shoe.

It’s taller, but the upper is super light-weight and thin.

This is a comfortable, good-looking shoe.

But, despite being mid-cut – it doesn’t offer much of any ankle support. That upper is just too thin.

Otherwise it feels like a normal Nano X – it’s using the same outsole and midsole.

As you can see, it has a comic book-inspired color theme.

Inspired by the Wonder Woman comic book, of course.

Here’s one of the latest versions of the Reebok Nano X – The Io training shoe.

The IO stands for Inside Out

This shoe is all about pure visual appeal, as there are no performance differences from the standard Nano X.

That’s our review of the many different versions of the Reebok Nano X from Reebok.

Some versions are special colors, some have special features, but all feature the same basic performance characteristics of the Reebok Nano X.

Overall, the Reebok Nano X is a great CrossFit shoe with a nice, wide fit – it’s a great shoe for the WOD.

Just be sure to pick a version that looks good to you.

Some product photos on this page are property of Reebok

We are an affiliate of Reebok and others that sell this training gear. If you buy clothing, shoes, or other training gear after clicking the links in this article, we receive a small commission at no extra cost to you. This helps us to bring you in-depth information and content on these great training products.

December 27, 2020 VA Worker Exercise Equipment 0
Disclosure: Links to other sites may be affiliate links that generate us a small commission at no extra cost to you.

Let’s review the Deadlift Bar Jacks available from Rogue. What’s a deadlift bar jack? It’s a handy device that lets you quickly and easily prop up a barbell (even if heavily loaded) to add or remove plates. Rogue, the leading manufacturer in strength and conditioning equipment, has now come up with new Deadlift bar jack options to improve your training. Here’s some of the bar jacks we are going to look at: Let’s check these out. Rogue Deadlift Bar Jack – Video Review on our YouTube Channel Why read when you can watch? Check out this video from our YouTube channel: We got hands-on with the Rogue Deadlift Bar Jack because it’s a great option to help you get more [Read more …]

June 22, 2021 fitadmin Exercise Equipment 0
Disclosure: Links to other sites may be affiliate links that generate us a small commission at no extra cost to you.

Here’s the Torque Tank from Torque Fitness – it’s a Push Sled. This push sled works great where others don’t – because it has wheels. Push Sled is a remarkably versatile piece of equipment that grants many advantages and delivers impressive outcomes in a minimal amount of time. It works your abdominals, quadriceps, glutes, hamstrings, calves, chest, hip flexors, triceps, and shoulders. It is a kind of low-impact cardio exercise, which is particularly helpful for runners. Here are some of the styles we are going to look at: Torque TANK Push Sleds – Overview What distinguishes all Torque Fitness TANKS is their ability to run both indoors and outdoors on any surface without gouging. They also increase the resistance the [Read more …]

January 4, 2022 fitadmin Cross Training Shoes 0
Disclosure: Links to other sites may be affiliate links that generate us a small commission at no extra cost to you. 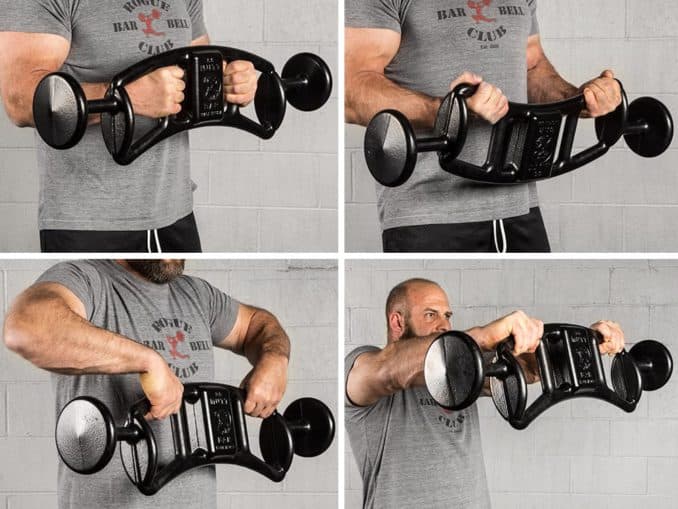 Ergonomic weights and bars from Mutt

Uncategorized
February 20, 2022 0
Disclosure: Links to other sites may be affiliate links that generate us a small commission at no extra cost to you. 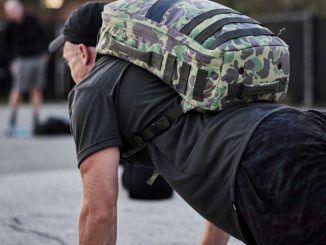 Rucking
November 13, 2022 0
Disclosure: Links to other sites may be affiliate links that generate us a small commission at no extra cost to you. 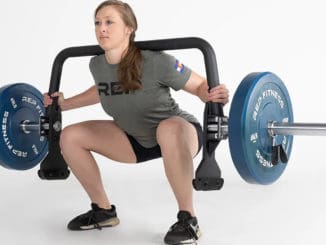 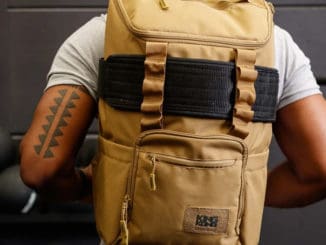 Exercise Equipment
June 30, 2021 0
Disclosure: Links to other sites may be affiliate links that generate us a small commission at no extra cost to you. 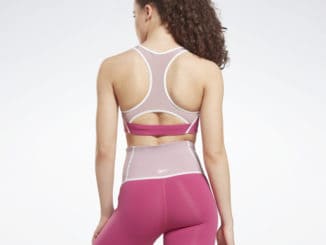 Exercise Equipment
August 28, 2022 0
Disclosure: Links to other sites may be affiliate links that generate us a small commission at no extra cost to you.